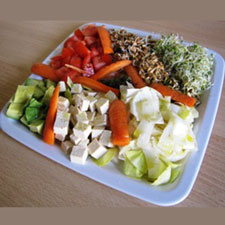 A yogi considers food as the fuel needed by his physical body to function. Consequently, a special attention is given to a proper diet, from a qualitative and quantitative perspective, so that the organism remains light, strong and relatively free from disease, one of the main obstacle on the path to happiness.

In order to keep the physical body healthy and full of energy, yoga recommends a natural diet mainly based on fruits, vegetables, grains, nuts… and excluding animal proteins.

Our cells and organs are made out of the molecules that constitute the food we are ingesting. The adoption of a healthy and moderate diet allows to solve permanently numerous health issues.

All the layers of our being are interconnected. Therefore, the quality of our food affects not only our physical state, but also our emotions and thoughts.

Our consumption habits can also have a great impact on the environment.

A vegetarian diet implies to abstain from consuming any animal flesh and is essentially composed of natural products from the plant kingdom. Here are the main forms of vegetarianism:

Often,the term “vegetarian” includes without distinction these three categories. Determining which one is the best diet is purely a matter of personal preference as each individual is different and many layers of our being are affected at this level. The best thing to do is to make some experiments in order to feel which option is the most suitable.

Adopting a diet adapted to the real needs of the body is an important step when one wishes to lead a healthier life. Numerous parameters should be considered to choose adequately which diet is the best for us. Here are a few important ones.

Benefits of a vegetarian diet

All the nutritional needs of a human body can easily be provided by a vegetarin diet. Various scientific studies clearly demonstrate that our organism is a lot more resistant and efficient when the intake of animal proteins is reduced, or even eliminated, and replaced by vegetable proteins. It was proven that their productivity is far superior and does not generate any of the body waste and negative effects associated with the absorption of animal products.

A comparative study between vegetarian and non-vegetarian demonstrated that vegetarians generally have an immune system more efficient and a cholesterol rate lower than non-vegetarian. Besides, the risk of cardiovascular diseases is strongly reduced.

According to Dr. T. Colin Campbell, researcher in nutrition at Cornell University in the US, and director of one of the widest epidemiological studies ever done, “the great majority of cancers, cardiovascular and other degenerative diseases, could easily be prevented by adopting a plant based diet.”

Likewise, Dr. William Castelli, director of an important clinical study led on the heart (Framingham Heart Study), declared once the study was finished: “Vegetarians have the best diet. Their group has the lowest rate of coronary diseases in the country (United States). […] The heart attack rate is far inferior with them and they have only 40 % of our cancers.”

The list of health benefits of a vegetarian diet goes on and on and the best way to check is to try it out for a while and see what happens. First, you can gradually reduce the consumption of meat and observe how the body reacts. The effects can usually be felt quite rapidly. Digestion is better and it takes less time to assimilate the food. Constipation problems tend to disappear. One is less sick. The energy level increases. The mind is clearer etc…

According to the conception of yoga, the choice of becoming vegetarian is not only based on the desire to experience an optimal health and to improve one’s physical and mental capacities. it also takes into account the impact of our diet on the other species. Thus, the principle of Ahimsa, or non-violence, the first Yama, invites the yogi to abstain from any food that has cost the life of a living being, or that has caused any suffering. Knowing the cruelty of current intensive farming and breeding conditions, the yogi consciously makes a choice to not participate to that cruel and barbaric genocide perpetrated against our younger brothers of the animal kingdom. Deprived from daylight, natural air, affection, crowded in cages too small to be able to move, and bearing unspeakable mutilations before being sent to the slaughterhouse, most of the time sick, full of antibiotics and hormones, these poor creatures are yet fully conscious and able to feel sensations and feelings, just like we do.

Impact of our diet on the environment

Beyond the considerations related to human health and animal ethics, the adoption of a diet exempt from animal products massively contributes to the preservation of the environment. Many studies clearly showed that the resources necessary to breed animals for human food would comparatively feed a lot more individuals than the meat produced. Here are a few numbers:

The question of diet is a very sensitive subject which touches deep areas in the human being because it is intimately related to the instincts of survival and conservation. Many psychological barriers erect themselves, like unsurmountable obstacles, when we come to think about renouncing a certain type of food or substance that we like for its taste or for the effect it produces on our consciousness. These resistances, yet absolutely natural and understandable, are mainly due to a lack of information on the subject and also to a certain indulgence for the senses which do not feel ready to let it go. Overcoming these internal barriers constitutes an important step for anyone who aspires to a healthier life, in harmony with the immutable principles of Nature, from which everything comes and to which everything returns.

For some people, the transition to a vegetarian diet occurs naturally without causing any tension. When our consciousness is ready, there is no notion of effort or suffering linked to a particular renouncement. Just like the autumn leaf detach itself from the tree, the desire for animal flesh fades away naturally when we realize what kind of impact our diet produces on our own organism and on all the other animal and plant species on the planet. From then, the little pleasure associated with the consumption of a “good” juicy steak for instance, appears profoundly inappropriate and in disharmony with the inner values to which we are beginning to identify.

For others, maybe more attached to the pleasures of the senses, the transition can take a little more time. The first important step is to lucidly look at the relationship between what’s in our plate and all the conditions that led to its production. Once this is truly done, the desire for animal flesh tends to progressively decrease. Moreover, the benefits felt on a physiological and energetical level are so stunning that any “relapse” is quickly associated to a step back in terms of well being and vitality.

Regarding the choice between the various options of vegetarianism, again, the best thing to do is to experiment and to observe with lucidity the effects of such a diet, not only on our organism, but also on the level of energy and mental clarity.

If we only take into account the impact on the environment, a vegan diet is the one that preserves the most the other kingdoms.
If we consider only health, a balanced vegan diet also presents numerous benefits. However, it is up to everyone to try each option and see how it goes because what works for an individual is not necessarily suitable for everybody.

Most of the time, a diet change requires to go through various transition phases to allow the body and also the mind to adapt, because the greatest resistances are indeed coming from our intellect, still largely influenced by the demands of the senses, of which it ardently supports the position.

Are dairy products any good for health?

There is a belief widely spread according to which dairy products are providing a good source of calcium. That is just not true. Several studies have demonstrated that the calcium in milk is not assimilated correctly by a human organism. It has also been proved that the countries that were consuming the most dairy products had the highest rate of osteoporosis. Furthermore, the milk protein, casein, is very difficult to digest for our stomach and its ingestion provokes an overproduction of mucus. People who consume a lot of dairy products often have difficulties to breathe and easily get sick in winter suffering from chronic colds and angina. Milk also has been identified as a strong allergenic and has been associated as a possible cause for asthma. It is interesting to note that human is the only species on Earth that consume the milk from another species, especially after his growth phase is over. Stopping or strongly reducing the consumption of dairy products very quickly enhances one's overall health, especially at the level of breathing, digestion and elimination. Skin problems like acne tend to disappear completely in a short time and skin becomes more beautiful and luminous.

Where do vegans get their calcium from?

Contrary to the common belief, dairy products are not offering the most appropriate source of calcium for humans, in particular because of a too high presence of phosphorus, which tends to slow down the calcification process. Assimilation of calcium by our organism happens in synergy with other elements, such as magnesium, silicon, phosphorus, vitamins A, C and D, amino-acids... that should be in a balanced quantity to obtain a good calcification. Thus, if these elements are deficient, the body will not be able to assimilate calcium correctly, independently of the amount ingested. Generally, it is always preferable to look into the plants world to obtain the nutrients that the body needs. Here is a non-exhaustive list of vegetables and seeds offering an interesting source of calcium, easily assimilated by human beings: - Vegetables with green leaves: cabbage, parsley, spinach, broccoli, cress, dandelion, nettle, plantain... - Nuts and some dried fruits: almonds, hazelnuts, walnuts, sunflower seeds, sesame seeds, pistachio, dates, figs... - Sprouted seeds (especially alfalfa, fenugrec), sea weeds, wheat juice...
See all FAQs