Stress is a physiological mechanism triggered by the autonomous nervous system to allow the body to adapt to a potential threat or danger. Very useful to protect the integrity of the body, stress can also be very harmful when it becomes chronic, as it is the case in our modern societies.

With the help of breathing techniques, postures and relaxation, not only yoga brings a real and durable relief to problems related to chronicle stress, but gradually, the practitioner is also able to react in a more balance and detached way when facing difficult situations.

Stress mechanism
The process through which tensions arise is intimately related to the nervous responses of the sympathetic and parasympathetic systems in a challenging situation or context.

Let’s take an example. You’re in the bush during a safari trip. Prudently, you get out of the jeep, holding your camera, and you see not far from where you stand a group of lions lazing around in the sun. You take a few photos and suddenly, one of the lions notices your presence and comes rushing in your direction whereas the car is at a distance of about 10 meters.

Let’s see what is occurring inside the body. The optical nerve transmits the visual impression to the cortex which then process the information and compares it with its inner database (memory) to determine whether this creature is known and if it represents a threat. Immediately, the brain identifies the big feline and associates it with a serious potential danger. An impulse is instantly sent to the sympathetic system to accelerate the metabolism of the entire organism so that it can reacts adequately to this imminent threat:
– Breath and heartbeat accelerate.
– Bronchial tubes dilate.
– Adrenal glands secrete adrenalin and cortisol.
– Pupils dilate and all senses are in alert.
– An important quantity of glucose is release in the blood stream to support an imminent muscular effort.
– All visceral activity is interrupted and blood is redirected towards the arms and the legs.
– Muscles contract, etc…

As a result, the entire organism is in a state of high alert, ready to either fight the threat or flight from it. The fight or flight responses are the two basic reactions when an individual is facing a danger. Now, unless you’re a Massaï warrior, you’ll probably opt for the second option: flight. Because of the change of metabolism induced by stress, the distance that separates you from the car is covered in no time and here you are safe and sound in the jeep. The lion, a bit disappointed that the game is already over, nonchalantly goes back to his ladies to continue his nap.

Note that all these highly complex physiological reactions occurred in only a fraction of a second.

Once the situation feels safe again, the nervous tension starts to decrease. The parasympathetic system activates to cancel the effects triggered by the sympathetic system when there was a danger. It is the rest and restore phase.
– Breath is calming down.
– Heartbeat is slowing down.
– Pupils contract.
– Blood goes back to the viscera.
– Muscles relax, etc…

Stress in daily life
In our example, stress is positive as it allows the organism to adapt to extreme conditions. The real problem happens when stress becomes chronic and that the parasympathetic system is no longer able to provide the “rest and restore” effect to the body. As a result, a gradual exhaustion of the nervous system occurs, which consequences can be very serious for the individual’s physical, emotional and mental health, as the nervous system is closely implicated in each of these layers of our being.

Lifestyle in modern society generates a permanent stimulation and aggression of the nervous system which creates a multitude of physical, emotional and mental tensions. Even though we do not normally face a lion very often in a city, daily urban and office life can nevertheless be filled with encounters and situations that are equally unpleasant, often involving vultures, wolves, sharks… which truly represent a threat for our nervous equilibrium.

Time constraints, emotional conflicts, financial worries, competitive environment, pollution, noise.. are among the main factors of stress. The work environment with its tight deadlines and schedule, its hierarchical relationships, the necessity to always prove oneself, the fear to loose one’s job, etc… probably represent the widest source of chronic stress in our current society, as we can see through the alarming number of people burning out each year. The individual is often submitted to repeated pressure and tensions, even though he is not necessarily aware of the damage going on inside. Unless a way is found to counterbalance the nervous exhaustion caused by chronic stress, the body ends up paying the price sooner or later. It is the repetitive aspect of stress that makes it dangerous, not necessarily its punctual intensity.

Stress management and Yoga
In order to handle one’s nervous tension, everyone has its own method. Sport, entertainment, sense enjoyment, holidays, change of job, house, partner… are all valid means to provide a temporary release of stress but very soon, one can see that the inner tension or uneasiness comes back sooner or later.

Yoga proposes a method to bring a durable relief to stress because it acts directly on the autonomous nervous system. Thus, instead of just letting the steam out of the pressure cooker, as it is the case with sport for instance, yoga also aims to reduce the intensity of the destructive fire burning the nerves, so that the pressure does not come back right after.

In a posture, a certain tension is exerted on a specific group of muscles and organs, which generates, especially for the beginner, a slight uncomfortable sensation that can feel like a struggle or a fight. The sympathetic system is activated to adapt to the situation. Then, the posture is immediately followed by a short relaxation where the muscles targeted in the previous position can relax completely. The parasympathetic system activates the rest and restore function.

This alternation between muscular contraction and relaxation constitutes a deep training for the autonomous nervous system. Progressively, the practitioner is able to go from one state to another with an increasing easiness. With this kind of preparation, it becomes much easier to face daily challenges and trials with a detached and relaxed attitude as our nervous system has progressively been trained to react positively. Moreover, the effects of a yoga session last up to 24 hours, notably through the hormonal system. Therefore, a regular practice can guarantee a relative impermeability to stressing agents, even if the organism is submitted to an important tension during the day. 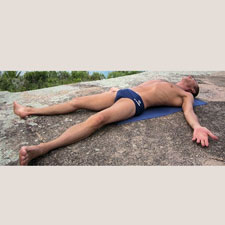 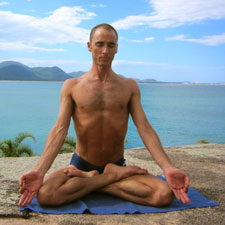 
Are breathing exercices any good for the brain ?

Yes. Breathing exercises have a very beneficial influence for the brain because an important supply of oxygen is provided, particularly during the retention of the breath. Moreover, some techniques such as the alternate nostril breathing allow to balance both brain hemispheres, hence optimizing the practitioner's mental faculties.
See all FAQs